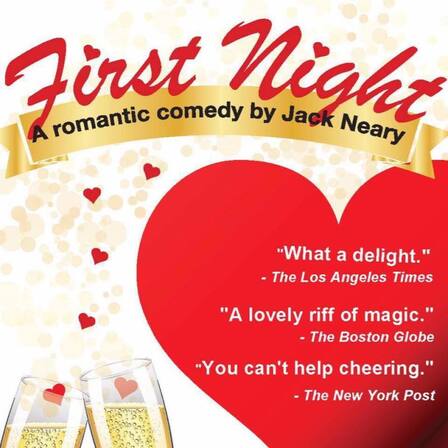 Join us for a nostalgic trip back to 1986 to a time of video stores and No CELL PHONES!  A bright, warm comedy about dreams, life, and love, that had critics and audiences cheering at its premiere. Danny Fleming had convinced himself that life’s dreams can’t be anything more than dreams. Then back into his life walks his eighth-grade crush, Meredith O’Connor – only now it’s Sister Meredith Louise, and it becomes a New Year’s Eve to remember.

JOHN MANNING (Danny Fleming) is thrilled to be back with Acting Out Productions where he previously played Victor in THE GATHERING and Ichabod Crane in THE LEGEND OF SLEEPY HOLLOW. Some credits include: Flip Whitham in the upcoming film PARALLEL AMERICA, directed by Oscar-winning writer Ernest Thompson, Gander in CHARLOTTE’S WEB at the Wheelock Family Theater, and Henry Higgins in MY FAIR, LADY at Stage 284.
JOCELYN DUFORD (Meredith O’Connor) holds a B.A. in Theatre from Dartmouth College with a focus on acting and sound design. Recent credits include Georgia in GEORGIA O’KEEFE PAINTS PARADISE and Nancy in KINDNESS AND CRUELTY: WILLA CATHER IN JAFFREY. Favorite past roles include the title role in MARY POPPINS and Kate Monster in AVENUE Q. Jocelyn’s website is www.jocelynduford.com
JACK NEARY (Playwright/Director) has written a number of original family plays for Acting Out, including FINAL CURTAIN and his adaptation of THE LEGEND OF SLEEPY HOLLOW. His most recent play for adult audiences, TRICK OR TREAT, opened Off-Broadway on January 12, 2019, and starred NYPD BLUE Emmy-winner Gordon Clapp. Jack’s website is www.jacknearyonline.com