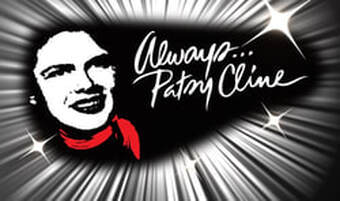 Always . . . Patsy Cline
Friday and Saturday, September 3,4  7:30 pm, tickets are $32
Always…Patsy Cline is a musical based on the true story about Patsy Cline's friendship with a fan from Houston named Louise Seger, who befriended the star in a Texas honky-tonk in 1961, and continued a friendship with Cline until her death.  The show is a tribute to the legendary country singer who died tragically at age 30 in a plane crash in 1963.  The musical play, complete with down home country humor, true emotion includes many of Patsy' unforgettable hits such as Crazy, I Fall to Pieces, Sweet Dreams and Walking After Midnight…27 songs in all.  The show's title was inspired by Cline's letters to Seger, which were consistently signed "Love ALWAYS… Patsy Cline."  Always…Patsy Cline has been one of the most produced musicals in America, including a successful run off-Broadway according to American Theatre Magazine. 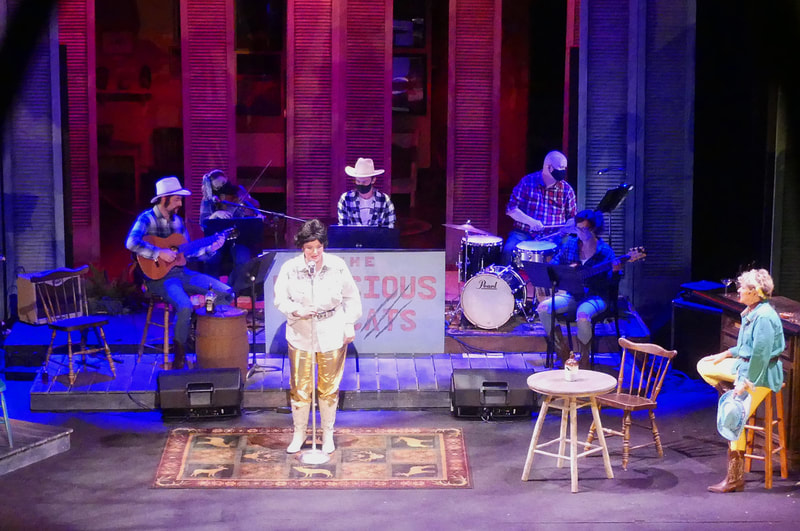 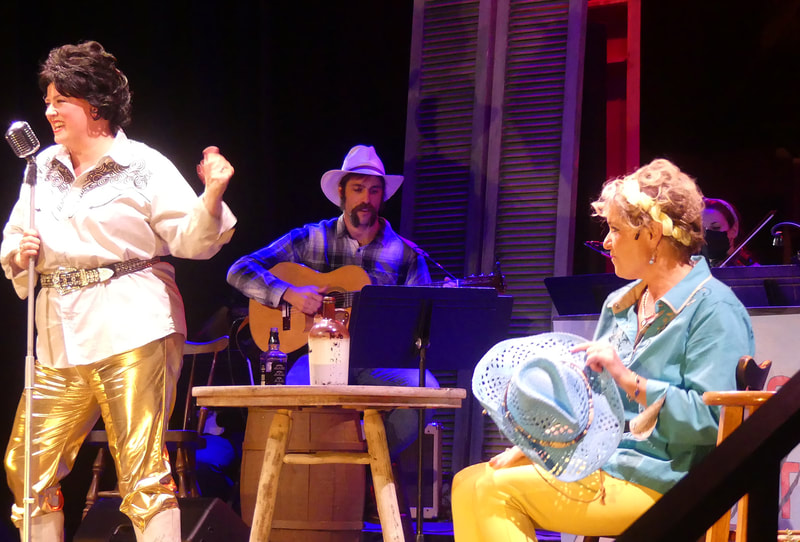 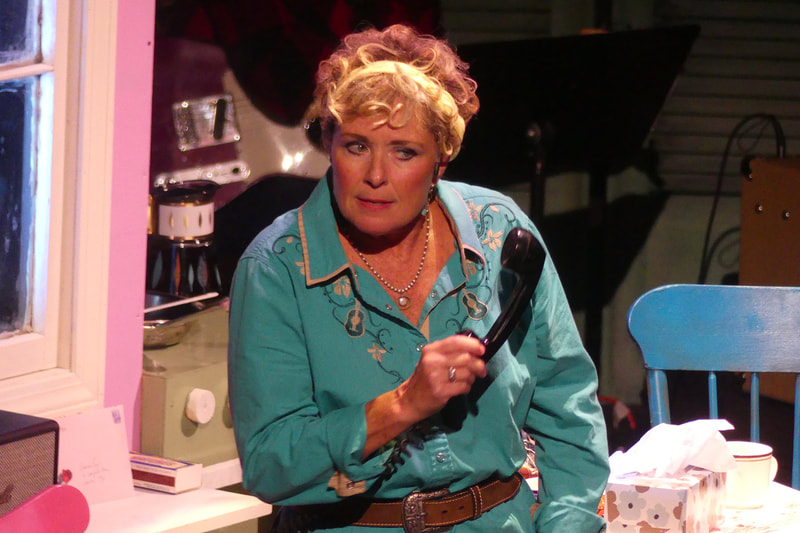 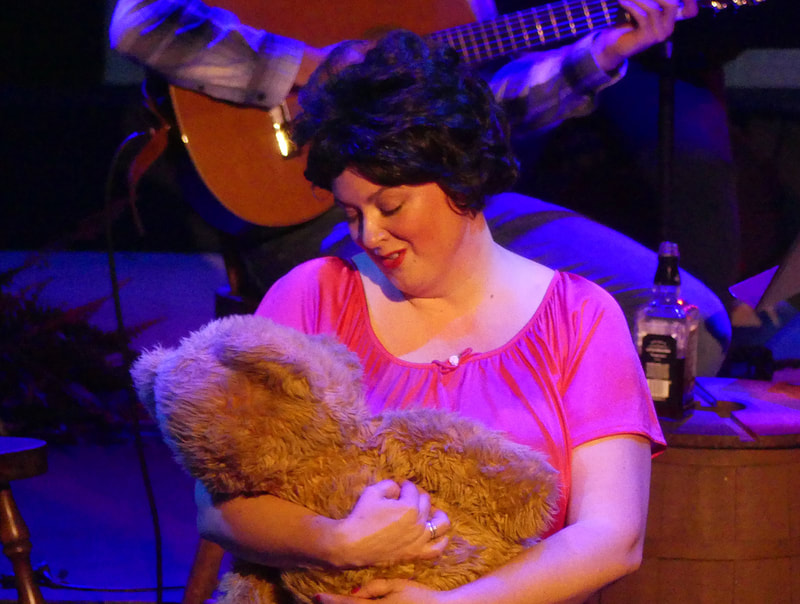 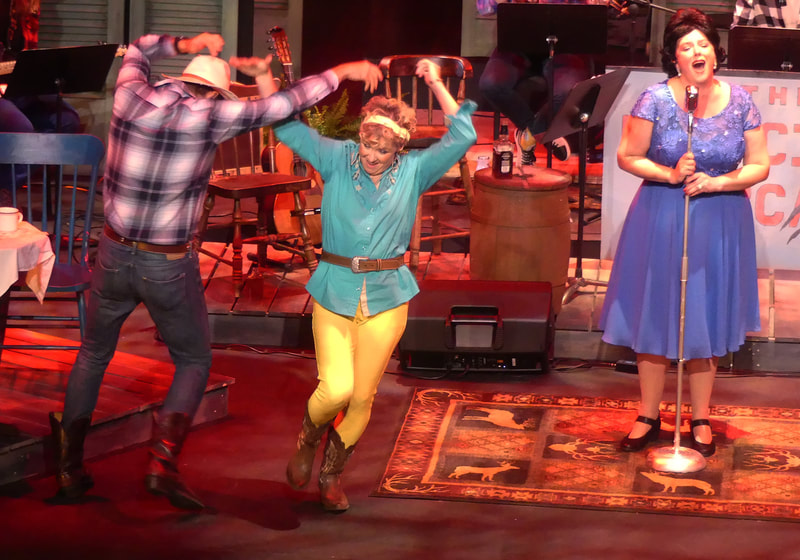 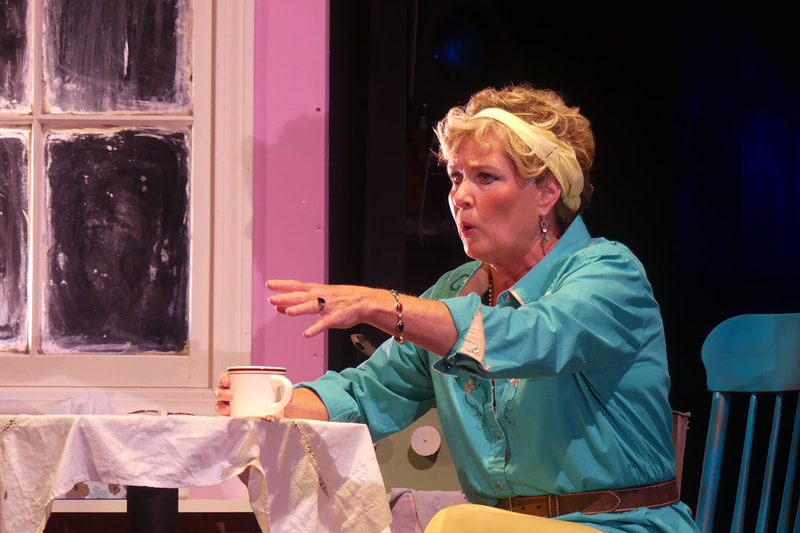 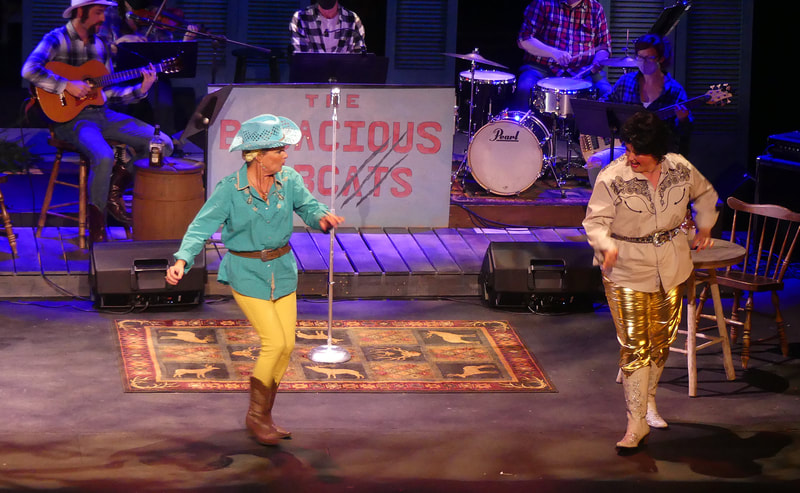 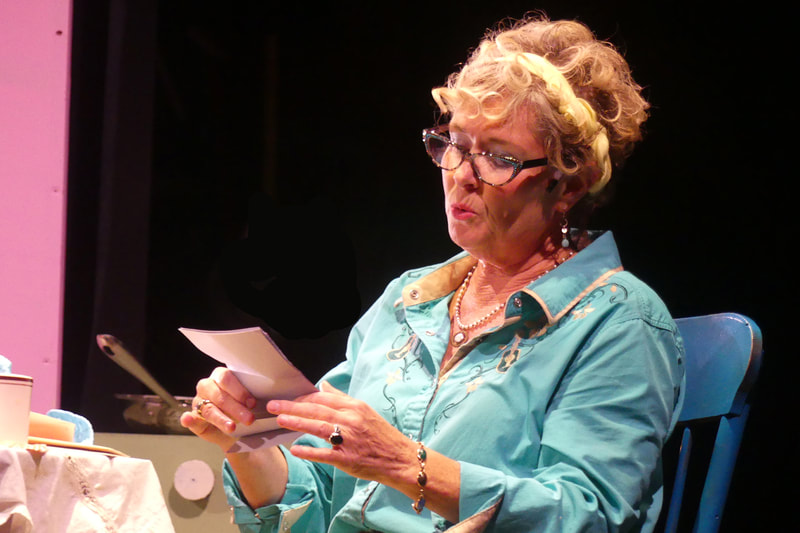 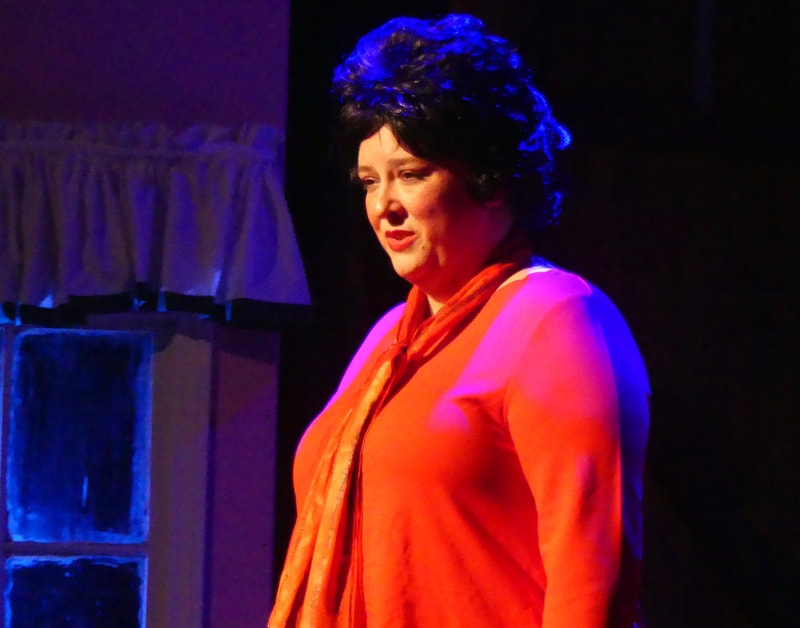 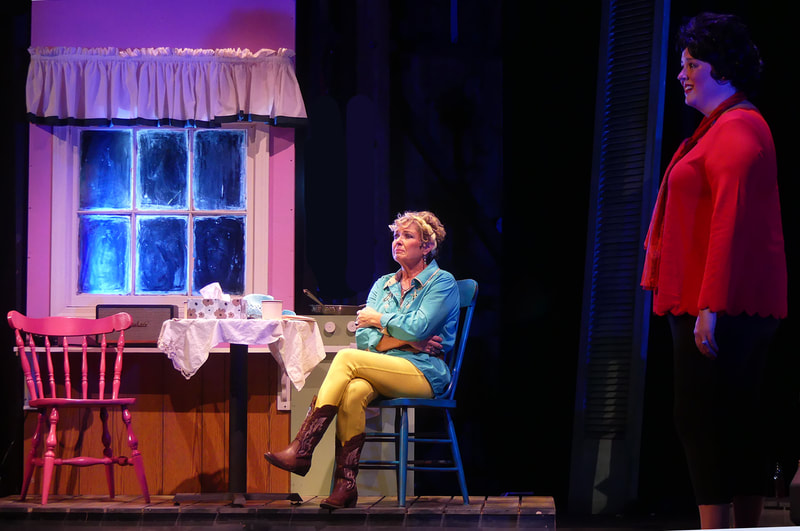 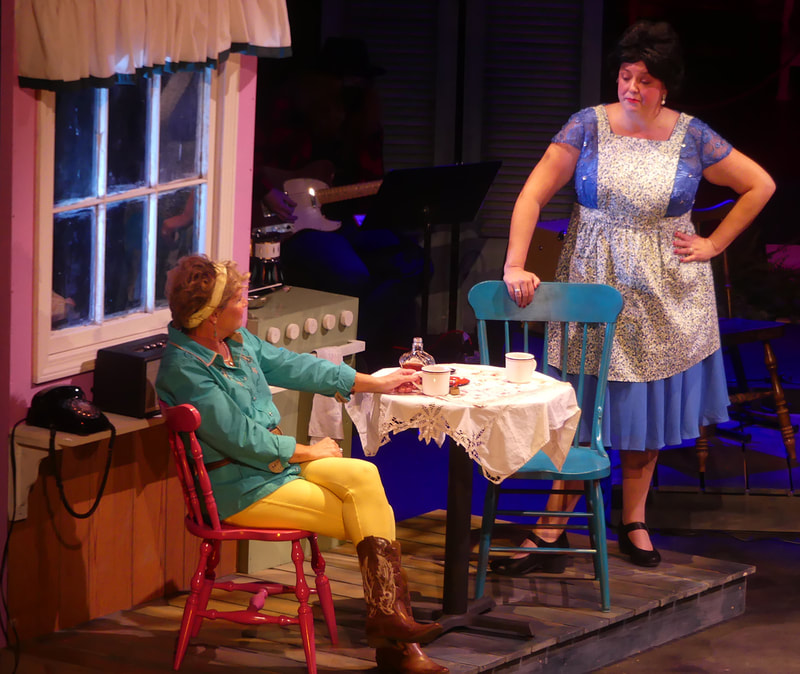 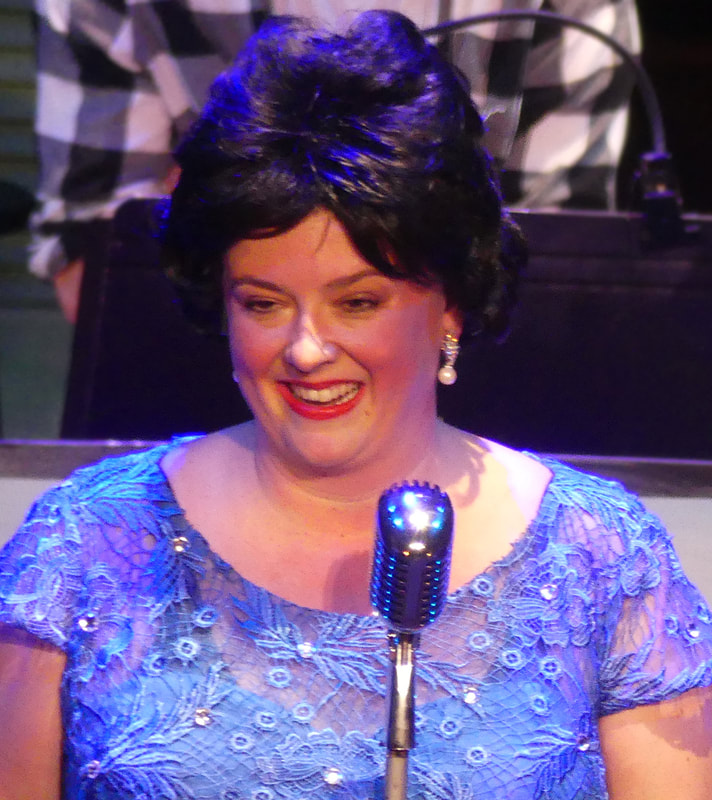 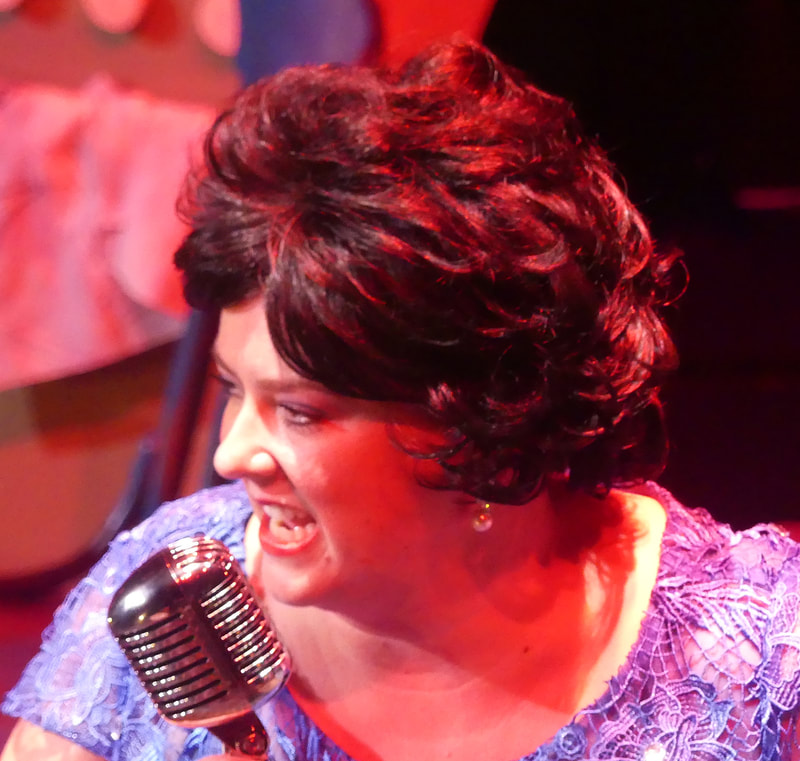 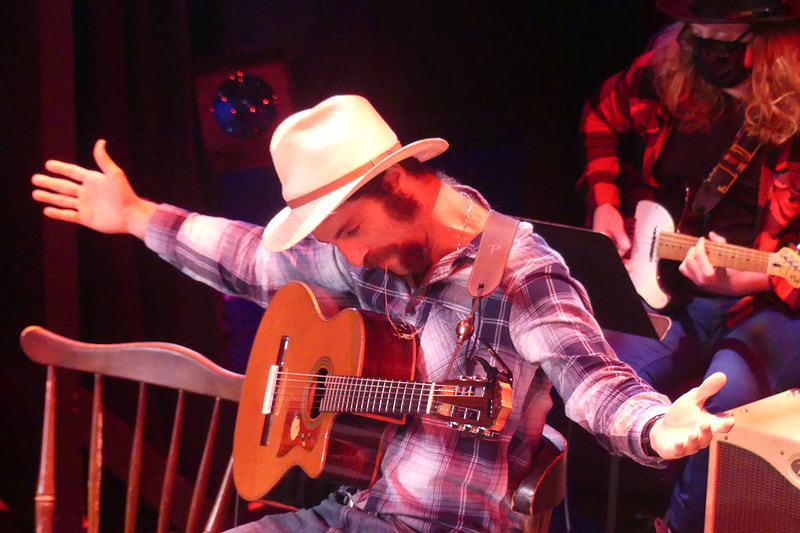 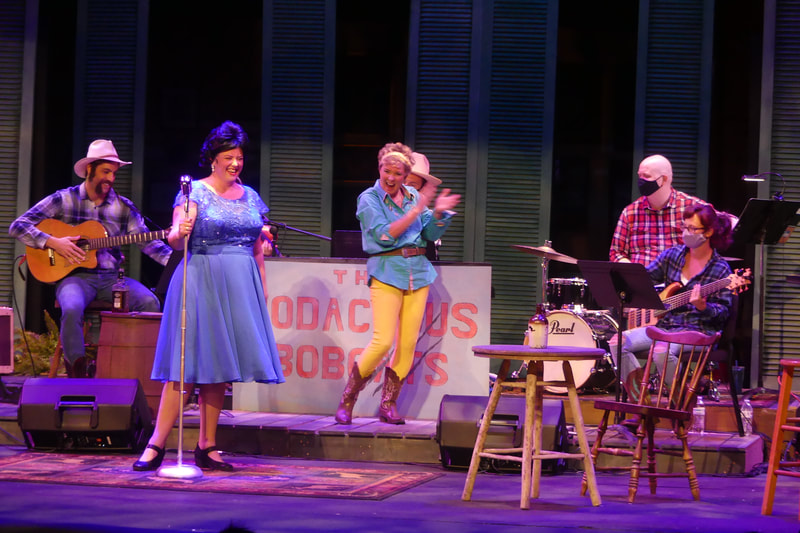 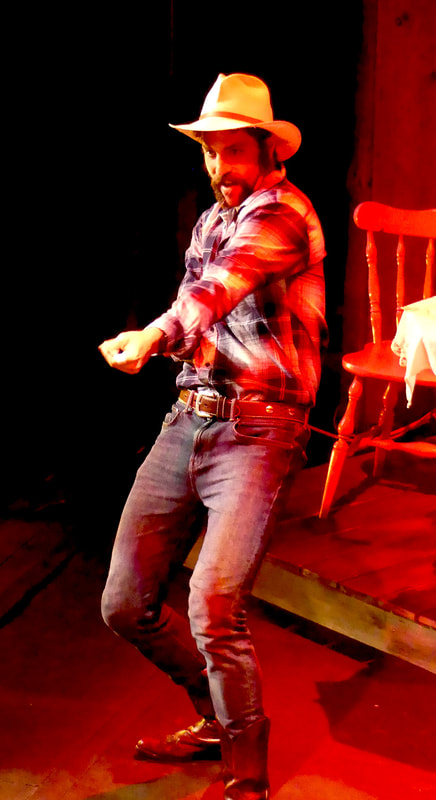 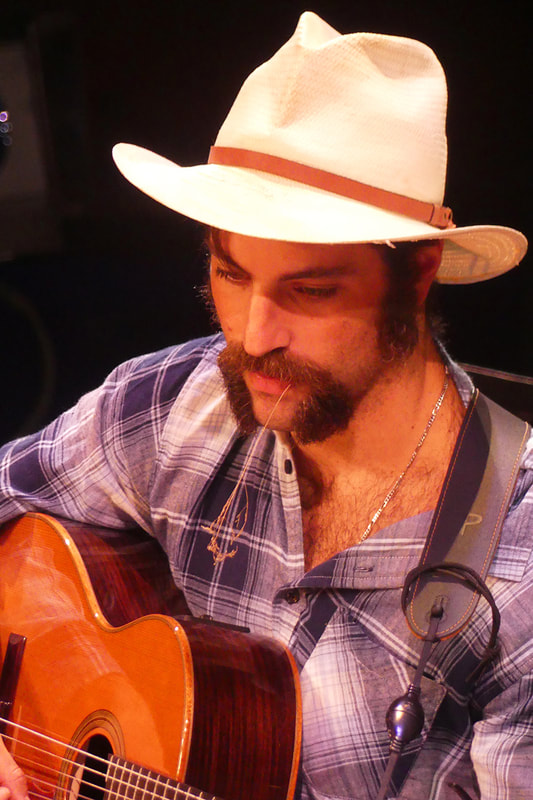 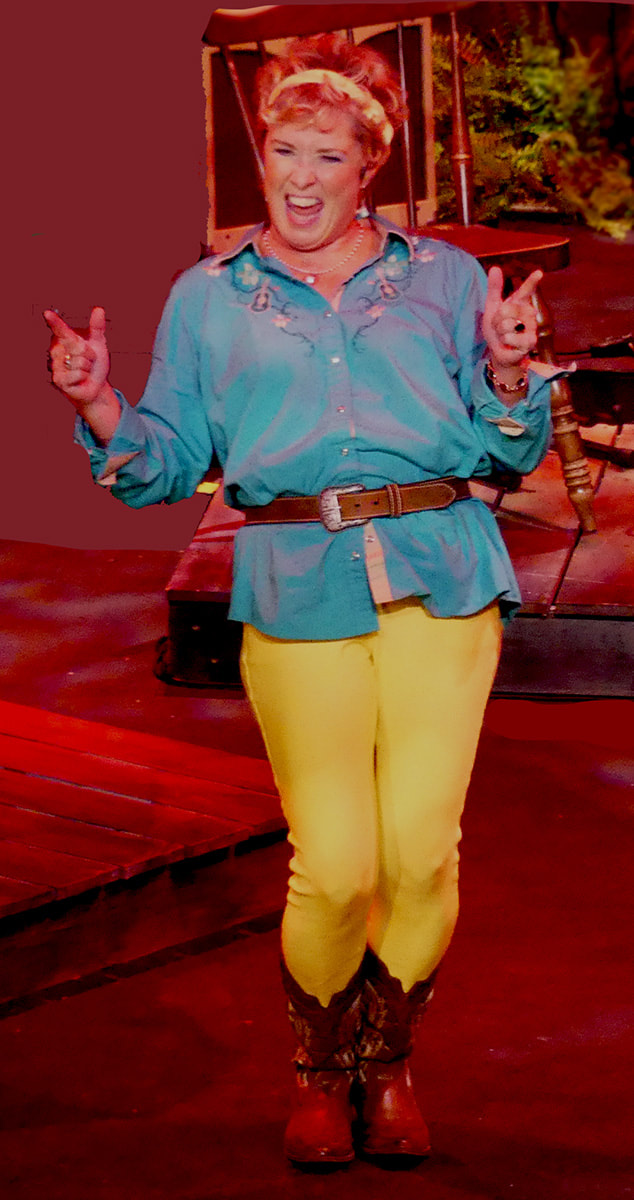 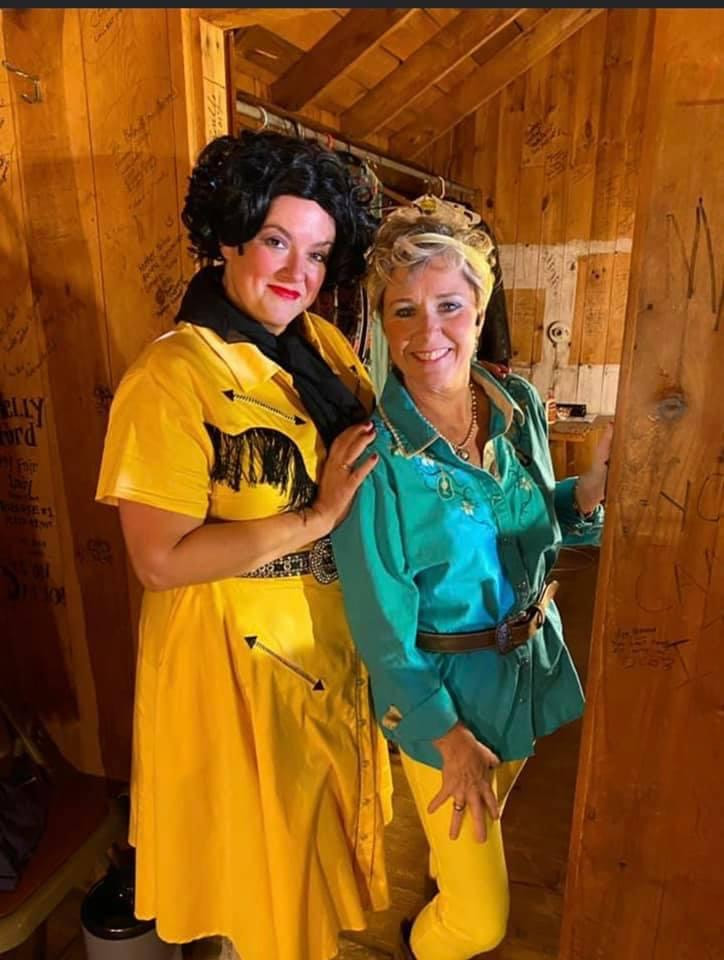 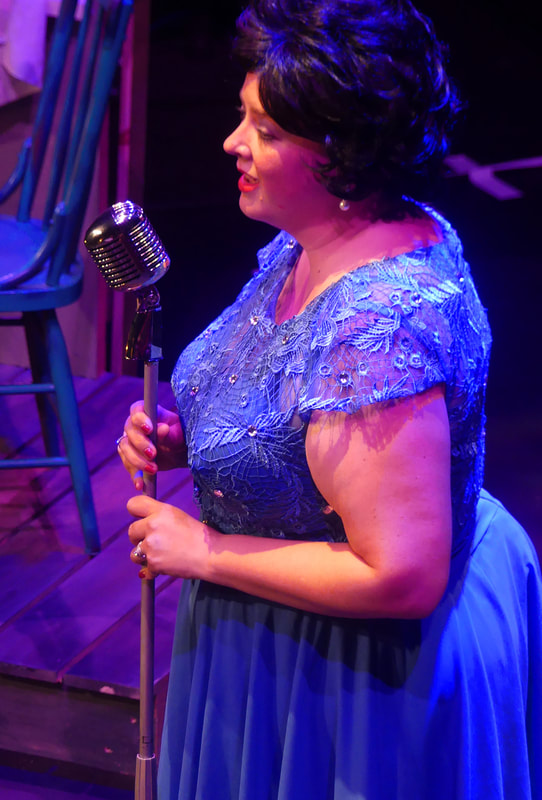 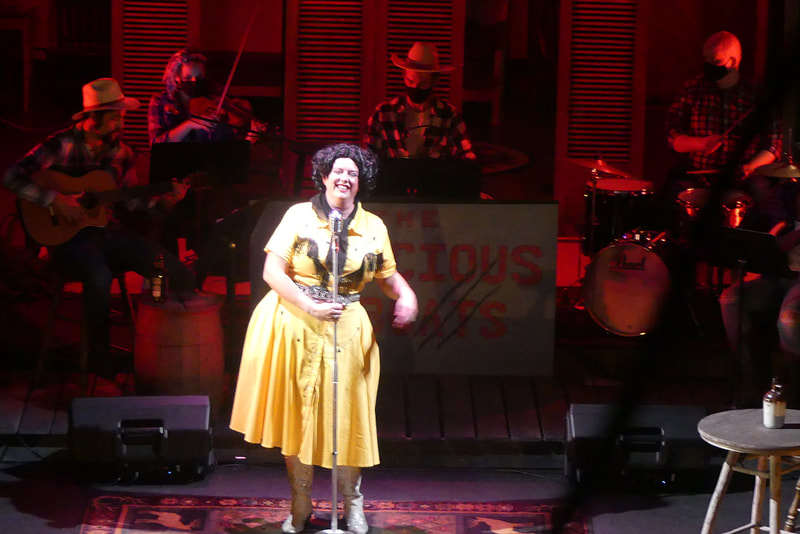 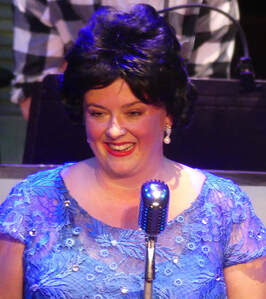 ​
​
Katie Connor (Patsy Cline) Katie is beyond thrilled to be playing Patsy Cline, in Always, Patsy Cline at the Deertrees Theatre! She is a graduate of the American Musical and Dramatic Academy (AMDA) where she studied Musical Theatre. For the past 11 year she has enjoyed performing her cabaret act at Club Cafe in Boston with her good pal, Bill Spera. Some of her favorite past roles include Rizzo in Grease, Georgie in Full Monty, and Soupy Sue in Urinetown. By day, she works for the A.A. Dority Company, and has been there for 17 years. She resides in Marlborough, MA with her wife, Allyson, and her 9 year old daughter, Lily.  "Thank you to my friends and family for all of your support and a special shoutout to my parents for always encouraging and believing in me. Love to Allyson & Lily." 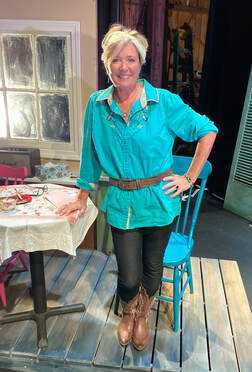 Gail Phaneuf (Louise/Director) is the Executive and Artistic Director for Deertrees Theatre.  She is thrilled to play Louise on stage with the inimitable Katie Connor playing Patsy Cline.  Gail is an award-winning playwright, composer, producer, actor and director.   Her teen musical The Love Note has enjoyed an Off-Broadway run at Actors Temple Theatre in NYC, and continues to have numerous productions at schools, regional theaters and theater camps.  www.thelovenote.com  The Love Note Musical is now offered by Heuer Publishing and Brooklyn Publishers ​for production.  MONSTERS! A Midlife Musical Meltdown, is a collaboration with Broadway lyricist Ernie Lijoi. The comic musical was a finalist in the Rod Parker Playwriting Competition, kicking off developmental readings in Boston and New York City.  MONSTERS! had its first full production at CentAstage in Boston. It was subsequently produced at the Deertrees Theatre in Harrison Maine, and was also staged at The Regent Theatre in Arlington, MA.  MONSTERS! Is also offered by Heuer Publishing, or you may visit  www.monstersthemusical.com    Gail's most recent show is the Memorize You Song Cycle that had it's debut at Deertrees this July.   http://www.gailphaneuf.com
Gail is the founder of G.P. Productions in Boston, and a former president of The Boston Playwrights’ Platform, where several of her plays were first first produced. Her short play Stop Requested was awarded best play and best director, and was also published by Heuer Publishing. Games and Puzzles was produced by Image Theatre Co. for their Fem-Noire Festival and the Boston Theater Marathon. Stop Requested and her prickly Urban Gardens were produced by the South Camden Theatre Company in New Jersey. Urban Gardens was awarded best play at the Playwrights’ Platform Summer Festival. Her plays A Perfect Match and Lapse were produced at the ACME Winter New Works Festival and the Boston Theatre Marathon. Her edgy political piece Random Selection was read at the Provincetown Theatre Company's Spring Playwrights Festival and was later performed at the Boston Theater Marathon and at Curry College. Random Selection was published in Belgium in a collection of the best short plays by Boston playwrights. Her haunting work Binding the Artful Dodger had its world premiere at Curry College and Breakfast with Mary had its world premiere at Deertrees Theatre in Maine in 2011. Her new one woman show  KIPPY, Pray for the Dead and Fight Like Hell for the LivingKippy Film Page! was due to premiere in Boston in 2020, but was cancelled due to Covid.  Gail filmed and edited a performance of the show during the COVID-19 Pandemic in isolation.
As an actor Gail has performed in hundreds of plays and musicals.  Most recently she played the role of Maxine Faulk in Night of the Iguana at the Provincetown Tennessee Williams Festival Directed by Fred Abrahamse (2019) and Leona Dawson in Small Craft Warnings directed by Patrick Falco. 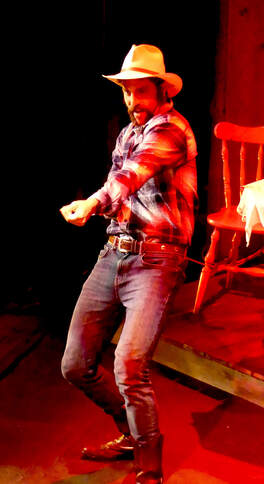 Antonio Harmsen Villa (Bob Bob in the band) Was most recently seen on stage at Deertrees as SPIKE! in Vanya and Sonia and Masha and Spike! (as well as the Knotty Readings, the Salt Lick Cabaret and Drag Bingo!)   He is currently our general manager at Deertrees and heads our lighting and technical crew.  He graduated from the William Esper Studio in the summer of 2019 in New York. His first performance as an actor was in "Buscando Nirvana" by Enrique Mendoza in Peru. He was seen most recently in "Night of the Iguana" by Tennessee Williams, in Provincetown, Massachusetts for the Tennessee Williams Festival -2019.  In 2020 he performed "The Piazza" by Barbara Anderson in Brooklyn, New York for the Black Box Festival, and then unluckily for him and the rest of human beings, Covid invaded the world. He's now appearing on stage once again at the Deertrees Theatre, where he's been having a great time rehearsing and working to get the theatre ready for the season. If you want to know more about him, you can check his website www.antonioharmsenvilla.com, or come talk to him after the show... he wont bite, unless asked and in the mood!  😂 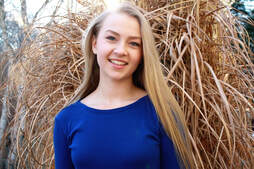 Madison Mayer (Stage Manager) was born and raised on Cape Cod where she has been performing live for the past 14 years. She made her Maine debut this season at the Deertrees Theatre! Madison was last seen as Nina in "Vanya and Sonia and Masha and Spike" and "Memorize You" at Deertrees Theatre.  Other roles include Johanna in "Sweeney Todd; The Demon Barber of Fleet Street" at the Provincetown Theatre, Missy Miller in "The Marvelous Wonderettes" at the Cape Cod Theatre Company, Sandy in "Grease" at the Barnstable Comedy Club, and Dainty June in "Gypsy" at the Cotuit Center for the Arts. She is excited to bring her stage management skills to "Always Patsy Cline"! ❤🎹 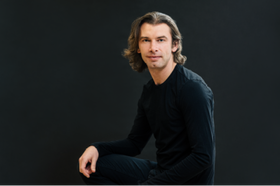 ​Evan Cuddy - Music Director (He/him/his) is a musician and a teacher residing in Portland Maine. He currently serves as organist/accompanist at the First Parish Church UCC in Yarmouth Maine, and has served as Musical Director at Lyric Music Theatre, Portland Players Theatre, and Maine State Music Theatre.  He also maintains a private studio that caters to violin and viola students of all ages, and is a violin instructor at the Waynflete school in Portland. He recently made his Hollywood debut as a featured musician/extra in Little Women. When not teaching or performing Evan enjoys long distance running, houseplants, long days on the beach, and quality time with his two cats, Chaquita and Halloween. Evan holds degrees in music performance from Susquehanna University and the University of Southern Maine.
​
ALWAYS… PATSY CLINE SONGS