Limited Season Passes Available for 2023!
Our full 2023 Season Announcement is coming soon.... and tickets will go on sale March 1st

Calendar View of ALL Events 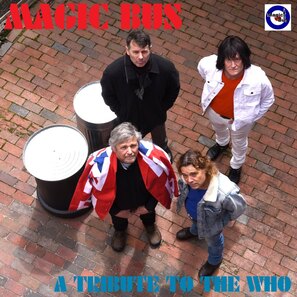 Magic Bus - The WHO Tribute Band!
Friday June 30th at 7:30PM
The Who, one of rock’s most iconic bands, made the charts in 1964 with their hit song, “Can’t Explain.” That was the beginning of their amazing journey. Still performing more than 50 years later, The Who can be heard in commercials, television theme songs and on the radio.
Magic Bus, a tribute band based in Portland, ME, captures the sound and feel of The Who. We’ll take you on a tour of the rock band’s discography, covering songs from “My Generation” to “Who Are You.” We also perform select songs from the rock operas “Tommy” and “Quadrophenia.” 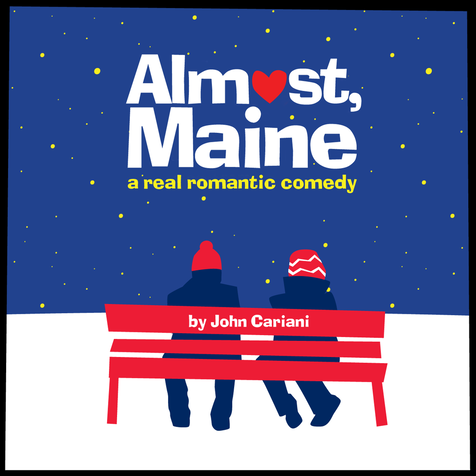 Almost Maine  July 7, 8, 21, 22, 23 at 7:30PM
Almost, Maine is a play by John Cariani, comprising nine short plays that explore love and loss and a little bit of magic in a remote, mythical almost-town called "Almost", Maine. It premiered at the Portland Stage Company in Portland, Maine, where it broke box office records and garnered critical acclaim.  John Cariani released a new novel based on the play in 2022!  The warmth and humor of the Mainers that populate this story are truly extraordinary. Come enjoy in Maine's Most Enchanting Playhouse!
​ 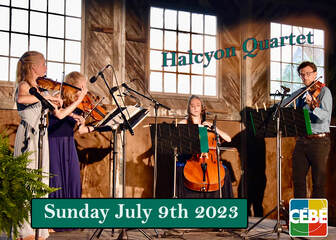 Halcyon Quartet  Sunday July 9th at 4PM  - Fundraiser
"Tipping Points with Halcyon String Quartet and the Center for an Ecology-Based Economy"
*Donations/Ticket proceeds for this Event go to The Center for an Ecology-Based Economy.
​
The Center for an Ecology-Based Economy (CEBE) brings you a concert/multimedia show featuring the Halcyon Quartet - bringing awareness to environmental challenges.  CEBE engages the community in addressing the climate emergency. We organize, educate, take direct action, and implement practical, ecological solutions for a just transition to a thriving, regenerative economy. Located in Norway, Maine, we welcome volunteers to support us in realizing our greatest potential as a community and creating a future where all can thrive. Find out more at www.ecologybasedeconomy.org or @ecologybasedeconomy on social media. 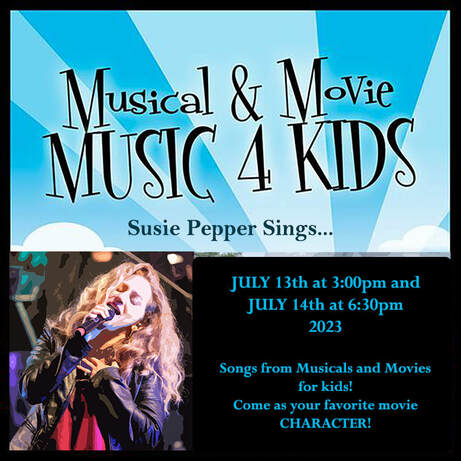 Susie Pepper and Mixology  July 2023  TWO FAMILY/KIDS Shows!
Thursday July 13th at 3PM
Friday July 14th at 6:30PM
​Sponsored by... (Your Name HERE!)
Susie Pepper will bring her voice and unmatchable energy to these TWO concerts geared for families and kids 2 to 80 years old!  The kids will have a chance to dress up as their favorite Movie character and enjoy making costumes and bringing them to the Deertrees Stage.  Thursday will be a matinee show so, the kids from the surrounding town REC Departments will be able to come see the show!  Friday will be a family concert and wicked fun night at Deertrees! 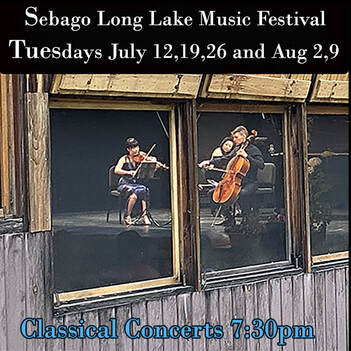 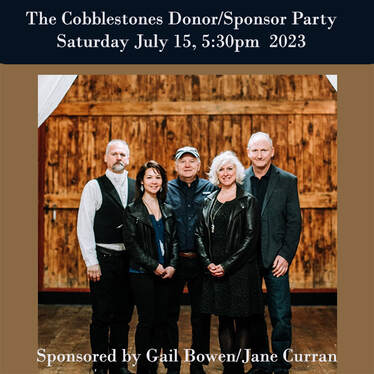 Donor/Sponsorship Dance Party July 15th 5:30PM
with The Cobblestones
Sponsored by Jane Curran and Gail Bowen
The Cobblestones Band will play at our Donor /Sponsorship party on Sat July 15th from 5:30 to 10:00pm  The party will offer complimentary food and a cash bar at the Salt Lick Cafe!  Come dance and mingle and listen to great music in our Art Gallery and Salt Lick Cabaret space and on our back porch under the Maine stars!

This event is free for all donors and sponsors and volunteers at Deertrees Theatre.  A suggested donation of $10 / per person is encouraged for all other patrons.
Piano Men Tickets Piano Men July 29th 7:30PM
Sponsored by Garvey Construction
​Piano Men - The music of Elton and Billy.  What do you get when you combine Elton John and Billy Joel on one stage?…. A night of Grammy award winning, Rock and Roll Hall of Fame inducing MAGIC! Elton John and Billy Joel have combined to sell over 350 Million records worldwide.  For four decades they have been a large part of the musical landscape, topping the album charts and playing to sold out audiences while continuing to receive heavy airplay on classic rock radio.  “Piano Men – The Music of Elton and Billy” is a tribute to the amazing songs of Billy Joel and Elton John.  Featuring Joe Boucher on piano and vocals with arrangements by Christopher Eastburn. 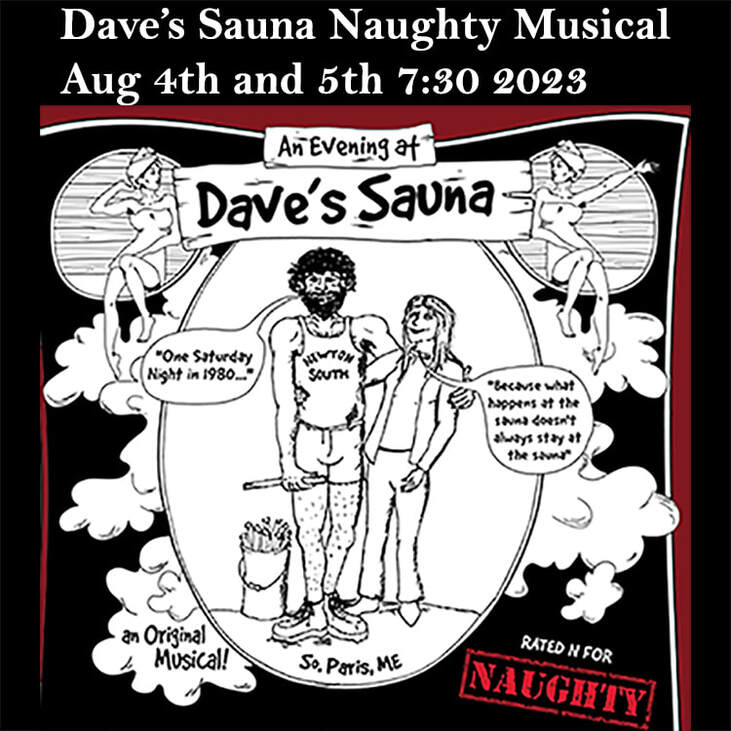 Click for Tickets
An Evening at Dave's Sauna  August 4th and 5th 7:30pm
MUSICAL BACK BY POPULAR DEMAND!!
Sponsored by...
Rated N for Naughty
The tale of one Saturday night in 1980 at the legendary Dave's Sauna in South Paris, Maine. Where hippies, rednecks, bikers, townies, swingers, and all kinds of folks would come for a sauna (and maybe more!)  Based on true accounts of the little sauna back in its HEYDAY!  Meet Weird Rob, Bearded Hippie, Off-Duty Waitress, 9-5 Guy, Neighbor Not Happy, Local Town Cop, Trailer Park Woman, MassHole, Dave’s best friend Saul, his wife Nancy, her best friend Josephine, the seductive Sauna Sirens and many other colorful characters. 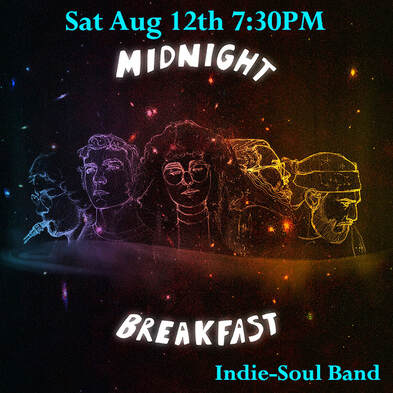 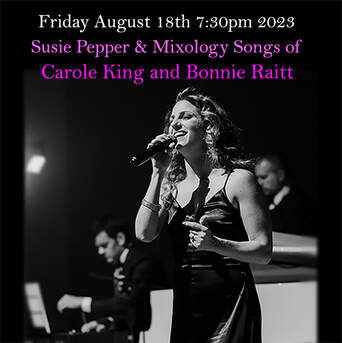 Susie Pepper sings Carole King and Bonnie Raitt
​Friday August 18th 7:30pm
Susie Pepper & Mixology wll present a one-of-a-kind concert with songs of Carole King and Bonnie Raitt!  Susie & Mixology will present a thrilling selection of songs that will soar to the star-filled sky over Deertrees.  Susie is a dynamic and highly sought-after vocalist throughout the region. Her talents led to her winning Fox23’s “Maine Idol” competition and becoming Miss Maine in 2009.   She was a featured soloist in the PSO’s 2014 and 2017 Magic of Christmas series, in addition to several other performances with the PSO.  Get your tickets EARLY!!  Susie is a beloved performer at Deertrees! Carpenters Re-Imagined in the Salt Lick Cafe Series
BACK BY POPULAR DEMAND!
Thursday Aug 24th 7PM
Singers Katie Connor, Gail Phaneuf and Patti Hathaway will present a cabaret performance of some of the Carpenters most famous hits!  Guest singers include Patti Hathaway with Sam Levy on Electric Guitar and Dan Fox on sax.  This will be a fun night to kick back and sing along.... it's  YESTERDAY ONCE MORE!
​ 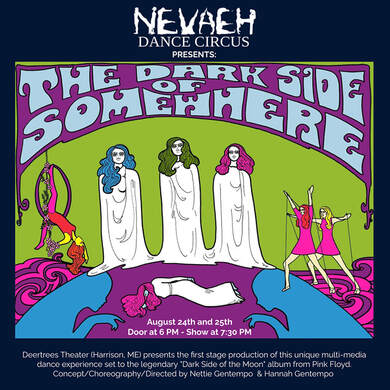 The Dark Side of Somewhere is a unique and immersive multimedia dance and circus arts experience brought to life by sisters Nettie and Hannah Gentempo.

This ever evolving production first showcased in 2014 is set to the legendary Pink Floyd album "Dark Side of the Moon". 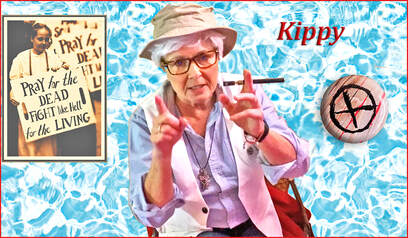 Kippy - Pray for the Dead and Fight Like Hell for the Living!
Friday Sept 1st 7PM
A one-woman theatrical imagining of Kip Tiernan, social justice hero and founder of Rosie's Place, The Greater Boston Food Bank, Healthcare for the Homeless and The Poor People's United Fund and many others.  Kip Tiernan was an extraordinary character and a force of nature who changed the face of social justice in Boston. Passionate and salty-tongued, she engendered outrage and empathy for the plight of poor and homeless women.  She founded Rosie’s Place in 1974, the first ever homeless shelter for women in the US.  Written and performed by Gail Phaneuf David Sheel Comedy/Piano
​Sunday Sept 3rd at 7PM
DO YOU WANT TO HEAR BEAUTIFUL AND TECHNICALLY BRILLIANT PIANO MUSIC? AND IN BETWEEN THE PIECES DO YOU WANT TO LAUGH YOURSELF SILLY?"
​A master of the keyboard" [The Times, Critics' Choice, London]
"Brilliant mayhem! He is a master of improvisation, accents, comedy, and down-right beautiful music"[Adelaide Advertiser, Australia]
Constantly updated with fresh material, Don't Shoot Me... continues to enjoy enormous success worldwide, and it is perhaps small wonder that David has so often been compared with the late, great Victor Borge.
Please consider at tax deductible donation to Deertrees
Contact Us to GET INVOLVED
See All Events

Check Out our Featured Artists!

The Deertrees Theater Art Gallery is open 2 hours prior to showtimes.
Deertrees considers it an honor to display and offer a gallery for local artists throughout the summer.
Browse Our Gallery
Questions or comments about Deertrees Playhouse and our programming?
​Please don’t hesitate to drop us a line. We’ll get back to you as soon as we can.